The purpose of this document is to use descriptive and inferential statistics to draw conclusions about data sets, e.g. a data set about 100 movies, containing opening gross, total gross, number of theaters, and weeks in the top 60, as well as a data set concerning stock prices over time for eight companies.

Descriptive statistics were calculated for the movies data set using Microsoft Excel (Table 1). There was a wide variation in the performance of the 100 movies, but the median Total Gross of $5.85, as compared to the mean of $33.04, suggests that only a few movies performed exceptionally well. The mean opening gross was $9.37 M, with a standard deviation of $18.87. It should be noted that the standard deviation is twice the value of the mean! This is due to the large skew (3.43) in the data, which, since it is positive, indicates a long tail towards the right. Comparing the high value with the mean ($108.44 versus $9.37) also suggests that the data is extremely skewed. The range was $108.43 M, with high of $108.44 and low of $0.01. 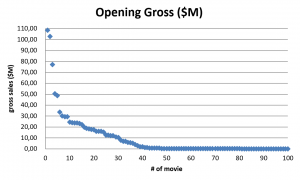 As can be seen in the graph (Figure 1), there are five main high-performing outliers (Star Wars: Episode III, Harry Potter and the Goblet of Fire, War of the Worlds, Mr. and Mrs. Smith, and Batman Begins), with gross sales between $40 M and $110 M. The skewness of the data is also evident with the extremely long tail to the right (notes that the data points were rank ordered before the graph was created). 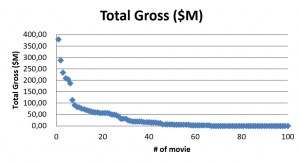 In the graph (Figure 2) of the total gross sales, seven outliers can be seen between $100 M and $400 M. Also evident is the positive skew mentioned earlier. 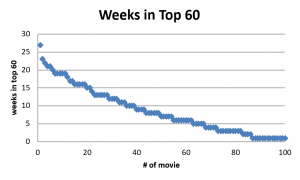 Correlations were computed to determine how the variables were associated with each other. Correlation coefficients (r) can range from 0 to 1 — 0 means there is no correlation and 1 means total correlation. The higher the r, the more closely related are the two variables.

Thus, it can be seen from the table that the correlation coefficients range from a low of 0.45 (Opening Gross with Weeks on Top 60) to a high of 0.96 (Opening Gross with Total Gross). Total Gross is also correlated with # of Theaters and Weeks on Top 60 at r = 0.71. Movies that are released in only a few theaters will inevitably make less money than those in wider release; as a result, limited release movies will not stay in the top 60 very long, if they make it there at all.

Table 3a. Descriptive Statistics for Stocks

Table 3b. Descriptive Statistics for Stocks

The tables of descriptive statistics (Tables 3a and 3b) list the mean, median, standard deviation, skew, high, low, and range of each of the 8 stocks plus the S&P 500. The stock with the greatest mean change for the 36 months was Sandisk at 0.069. The stock with the least was Microsoft at 0.005. Sandisk also had the highest standard deviation — 0.195, and this was reflected in its range (the largest at 0.785) and skew (0.039). However, the largest skew was Exxon Mobil with a positive skew of 1.52. This positive skew suggested that Exxon Mobil had outliers of large change to the positive side. The S&P 500 had a mean and median 0.01 for each, indicating that it changed less than 6 of the 8 stocks — i.e., 6 stocks outperformed the market as a whole, represented by the S&P 500. The S&P also had the lowest standard deviation, indicating that all 8 of the stocks were more variable than the index.

Regression models were constructed to relate each stock to the S&P 500, giving the following beta and R2 values:

The betas for the 8 stocks, indicated above, reflect the variability of the stock price relative to the index. These figures apply to the downside as well as the upside — for example, Sandisk, with the highest beta (2.605) could be expected to vary widely in both directions. Other high variability stocks were Caterpillar, McDonald’s, and Qualcomm. During a bull market, these 4 stocks would perform best, while the other 4 would better retain their value in a down market because they have smaller betas.

The R2 values (coefficients of determination) represent the amount of the stock’s variation (i.e., its return) that is explained by variation in the index; these ranged from 0% (Johnson & Johnson) to 33.8% (McDonald’s). Along with Caterpillar and Qualcomm, McDonald’s is more closely tied to the movements of the S&P 500 than the other 5 stocks.